A coalition of 57 municipal shelters and animal welfare organizations joined together in 2014 to form the NKUT initiative, led by Best Friends Animal Society, to work together with passionate individuals to end the killing of dogs and cats in Utah shelters, to make Utah a no-kill state.

The NKUT Coalition is working to ensure that every shelter and community in Utah reaches the threshold 90% save rate individually, which means it becomes urgent to focus on finding solutions in areas where the greatest number of pets are being killed.

The save rate means that at least 90% of the animals entering Utah shelters leave alive, either through adoption, being taken in by another animal group, or being returned to their owners. (The remaining 10%, or less, typically are euthanized for severe, untreatable medical or behavioral issues.)

With thorough research, Best Friends has identified the counties and specific shelters that have the largest lifesaving gap (the number of pets’ lives that need to be saved to reach the no-kill threshold).

This week, a Utah County Report Card was created and released, which indicates that Utah County has been identified as the community with the most urgent need for lifesaving change in the state, with 1,290 pets killed in 2018.

“Utah County has the largest lifesaving gap in the state,” LaSalle continued, “largely because it is the only county along the Wasatch Front without Return-To-Field (RTF) programs, where shelter clinics spay/neuter, vaccinate and ear tip feral cats that enter shelters as strays, then officers release them back where they were found. This program is one of the most important lifesaving policies for a no-kill community, as the catch-and-kill method of handling community cats has proven over decades to be ineffective. Weber, Davis, and Salt Lake Counties all have successful RTF programs, but Utah County remains the only urban county to not adopt the practice which is becoming the national norm. Best Friends is dedicated to closing that gap and will support Utah County in implementing a return to field program with our own funds and staff.”

“Bottom line, since the state passed the Community Cat Act in 2011, cities and counties across the state have been utilizing this method of managing community cats for years to great success,” LaSalle said. “We have laid out a clear pathway to success in Utah County, and it’s now up to the community to hold elected officials, the special service districts, and shelters accountable to this plan that will save the lives of hundreds of cats in Utah County.”

Best Friends also has demonstrated its commitment to saving lives in Utah County, and has been part of the community for more than a decade, operating a clinic in Orem to provide low-cost spay/neuter and vaccines for Utah County residents.

The Utah County Report Card offers clear suggestions for ways residents can make an impact in the effort to end the killing of pets in their community. The report card directs residents to North Utah Valley Animal Shelter (NUVAS) and South Utah Valley Animal Shelter (SUVAS) to adopt or volunteer and reminds them that low-cost spay/neuter services are available at Best Friends Spay/Neuter Clinic in Orem. Additionally, the document points out the plight of community cats and encourages them to support initiatives that save the lives of community cats by volunteering to help with trap-neuter-return programs or caring for a community cat colony. And asks them to engage by calling local city leaders and ask them to support lifesaving trap-neuter-return (or return-to-field) in Utah County, along with contact information for the city leaders.

“NUVAS created a committee to consider adopting a Best Friends funded and supported community cat pilot program this month. If community members support this program, we encourage them to reach out to the committee to show their support,” LaSalle said. More information is available at nkut.org.

At the end of 2018, Utah’s save rate stood at just above 85%. There were an estimated 3,490 pets killed in Utah shelters last year, simply because they didn’t have safe places to call home. While that number may seem daunting, it represents just ten additional families or individuals each day over the next year choosing to save a life by adopting a pet from a shelter or rescue group.

Much progress has been made statewide since the original coalition (formerly called the No More Homeless Pets in Utah Coalition) was formed in 2000. At that time nearly 38,000 healthy and adoptable animals were being killed in Utah every year.  Today that number is down to around 3,500.

In 1999 more than 103 animals were killed in Utah’s shelters every day. Today that has dropped to around 10 per day, a number of lives that is very possible to save with community support. Together, we will make Utah no-kill.

Best Friends Animal Society is a leading national animal welfare organization dedicated to ending the killing of dogs and cats in America's shelters. In addition to running lifesaving programs in partnership with more than 2,600 animal welfare groups across the country, Best Friends has regional centers in New York City, Los Angeles, Atlanta and Salt Lake City, and operates the nation's largest no-kill sanctuary for companion animals. Founded in 1984, Best Friends is a pioneer in the no-kill movement and has helped reduce the number of animals killed in shelters nationwide from an estimated 17 million per year to about 800,000. That means there are still nearly 2,200 dogs and cats killed every day in shelters, just because they don’t have safe places to call home. We are determined to bring the country to no-kill by the year 2025.

Working collaboratively with shelters, rescue groups, other organizations and you, we will end the killing and Save Them All. For more information, visit bestfriends.org.

To become a fan of Best Friends on Facebook, go to Facebook.com/bestfriendsanimalsociety. 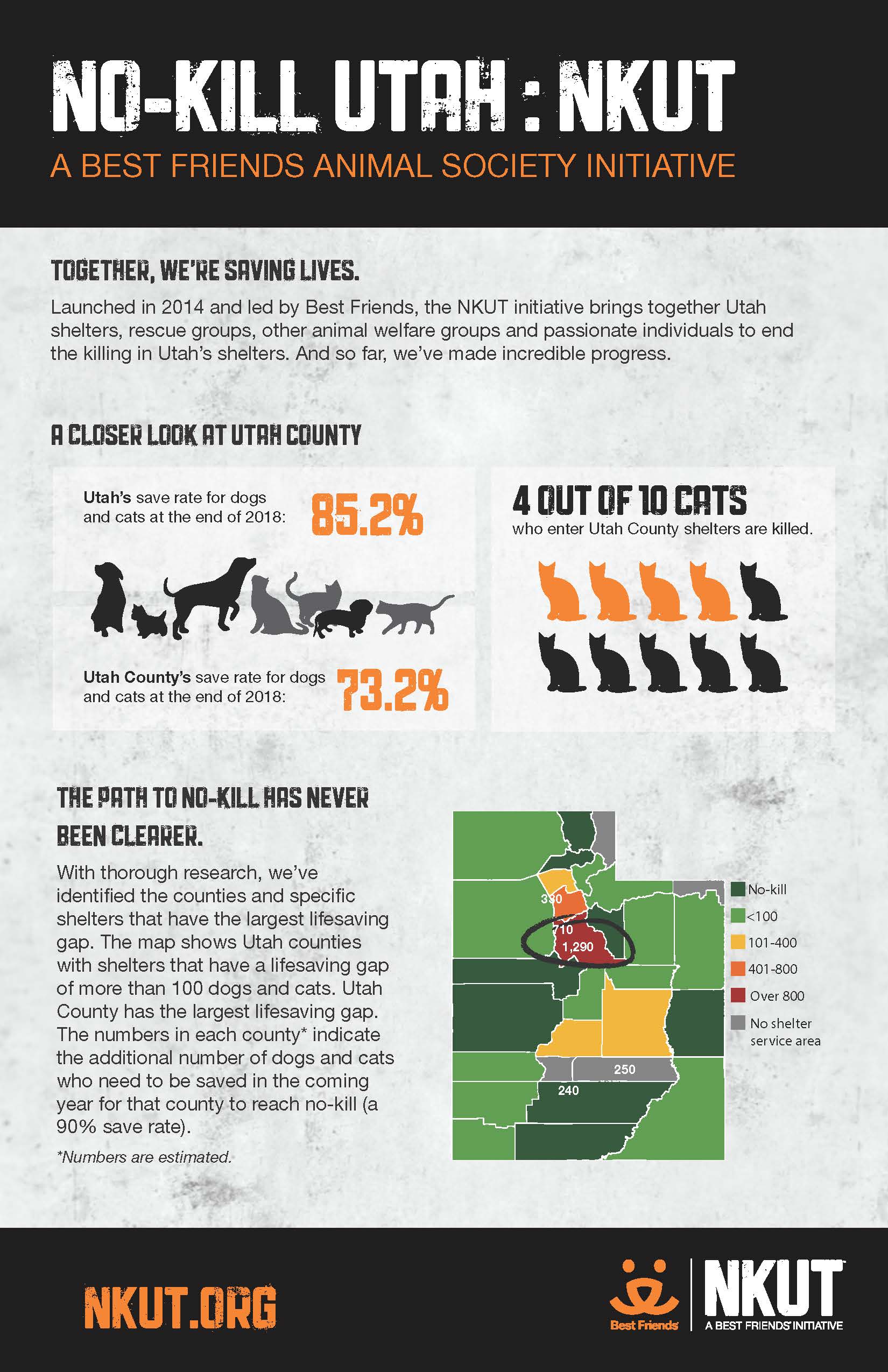 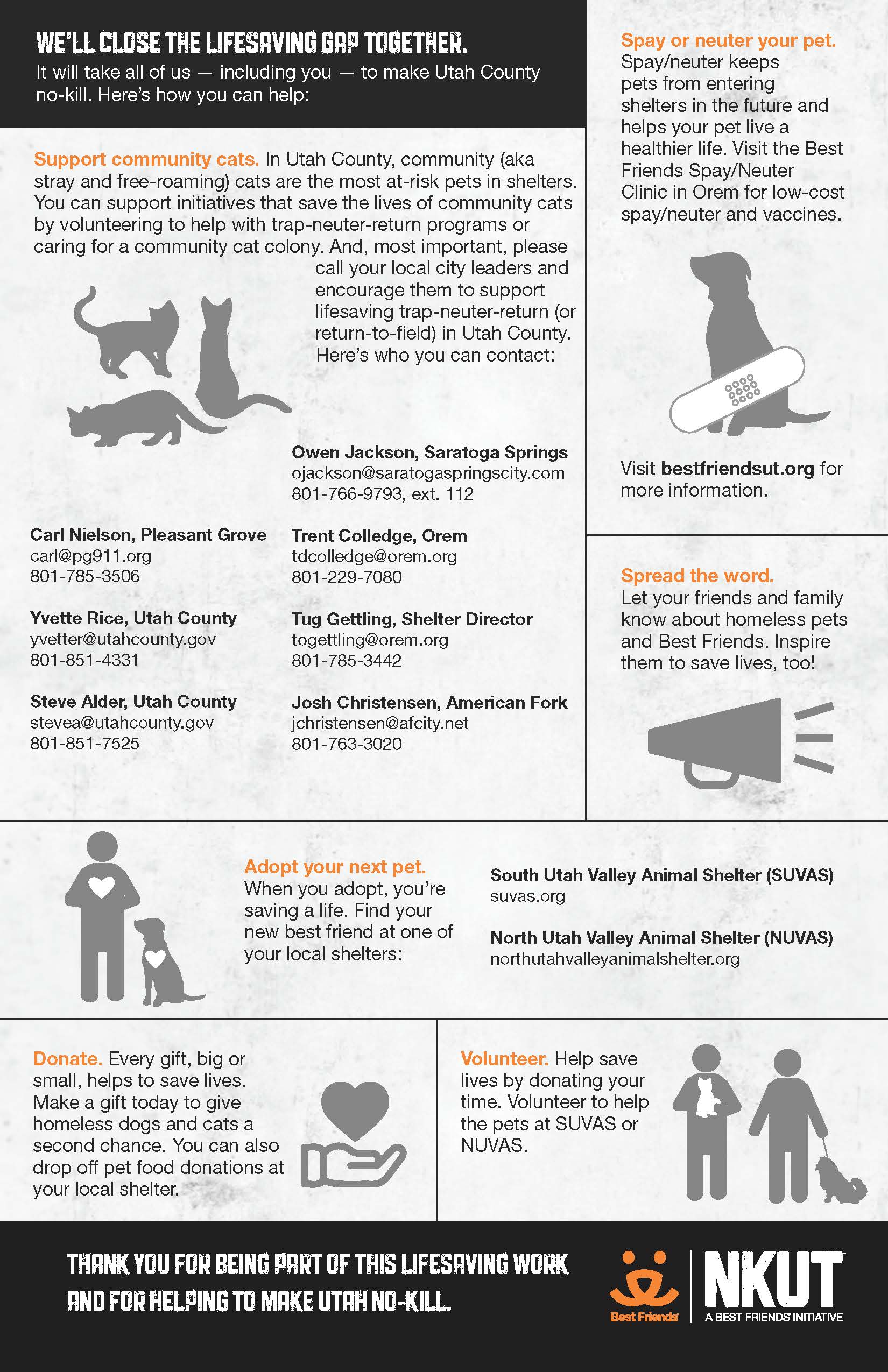