Best Friends Animal Society has produced a report card to offer a detailed look at progress and areas of focus for the statewide No-Kill Utah (NKUT) initiative.

A coalition of 57 municipal shelters and animal welfare organizations joined together in 2014 to form the NKUT initiative, led by Best Friends Animal Society, to work together with passionate individuals to end the killing of dogs and cats in Utah shelters, to make Utah a no-kill state by the year 2020.*

On Sunday, May 12, from 10:30 a.m. to noon, Lydia LaSalle, Executive Director, Utah Program, Best Friends Animal Society, will be on hand at the Best Friends Lifesaving Center, 2005 S. 1100 E. in Sugar House, to explain changes to the NKUT Initiative and to focus on vital steps to save the lives of dogs and cats in our state.

The NKUT Coalition is working to ensure that every shelter and community reaches the threshold 90% save rate individually, rather than averaging all shelters and communities together. When Utah achieves this goal, we will be the second no-kill state in the country by this standard.

This save rate means that at least 90% of the animals entering Utah shelters leave alive, either through adoption, being taken in by another animal group, or being returned to their owners. (The remaining 10%, or less, typically are euthanized for severe, untreatable medical or behavioral issues.)

At the end of 2018, Utah’s save rate stood at just above 85%. There were an estimated 3,490 pets killed in Utah shelters last year, simply because they didn’t have safe places to call home. While that number may seem daunting, it represents just ten additional families or individuals each day over the next year choosing to save a life by adopting a pet from a shelter or rescue group.

The public is key to reduce the number of animals killed in shelters. Best Friends through the years has stressed the importance of personal responsibility in multiple areas of pet ownership: spaying and neutering, microchipping and licensing, breeders or online retailers, fostering or volunteering for a shelter or rescue group, donating and spreading the word as a community advocate. Some shelters are more innovative than others in adopting lifesaving programs. Individuals can find out more about the policies of their local shelters and learn how they can support them in their work toward no-kill.

Because of the decision to raise the bar to make every shelter and community no-kill by 2020, there is far greater focus and urgency in the areas of the state where the most dogs and cats are being killed. With thorough research, Best Friends has identified the counties and specific shelters that have the largest lifesaving gap. While the good news is that 30 shelters in Utah are operating at or above a save rate of 90%, unfortunately, five counties killed 200 or more animals last year, with Utah County showing the largest lifesaving gap of 1,290 pets killed in 2018.

“Approximately 63% of the pets killed in Utah shelters are felines. For Utah to reach our no-kill goal, we must focus on saving more cats and kittens,” said LaSalle. “Community cats, aka stray and free-roaming are some of the most at-risk pets in Utah’s shelters.”

“Utah County has the largest lifesaving gap in the state,” LaSalle continued, “largely because it is the only county along the Wasatch Front without Return-To-Field (RTF) programs, where shelter clinics spay/neuter, vaccinate and ear tip feral cats that enter shelters as strays, then officers release them back where they were found. This program is one of the most important lifesaving policies for a no-kill community, as the catch-and-kill method of handling community cats has proven over decades to be ineffective. Weber, Davis, and Salt Lake Counties all have successful RTF programs, but Utah County remains the only urban county to not adopt the practice which is becoming the national norm. Best Friends is dedicated to closing that gap and will support Utah County in implementing a return to field program with our own funds and staff.”

“Bottom line, since the state passed the Community Cat Act in 2011, cities and counties across the state have been utilizing this method of managing community cats for years to great success,” LaSalle said. “We have laid out a clear pathway to success in Utah County, and it’s now up to the community to hold elected officials, the special service districts, and shelters accountable to this plan that will save the lives of hundreds of cats in Utah County.”

Best Friends also has demonstrated its commitment to saving lives in Utah County, and has been part of the community for more than a decade, operating a clinic in Orem to provide low-cost spay/neuter and vaccines for Utah County residents.

Much progress has been made since the original coalition (formerly called the No More Homeless Pets in Utah Coalition) was formed in 2000. At that time nearly 38,000 healthy and adoptable animals were being killed in Utah every year. Today that number is down to around 3,500.

In 1999 more than 103 animals were killed in Utah’s shelters every day. Today that has dropped to around 10 per day, a number of lives that is very possible to save with community support. Together, we will make Utah no-kill by 2020.

*The original goal was to make the entire state no-kill by 2019. Rather than averaging the save rates of all shelters and communities together, we’re now working to ensure that every shelter and community reaches the threshold 90% save rate individually. Best Friends also now counts all animals that come into shelters, without excluding categories such as animals whose owners request that they be euthanized, as some of those may be treatable and could be saved. The new method changes Utah’s no-kill goal year to 2020, and it will give even more dogs and cats the second chances they deserve. 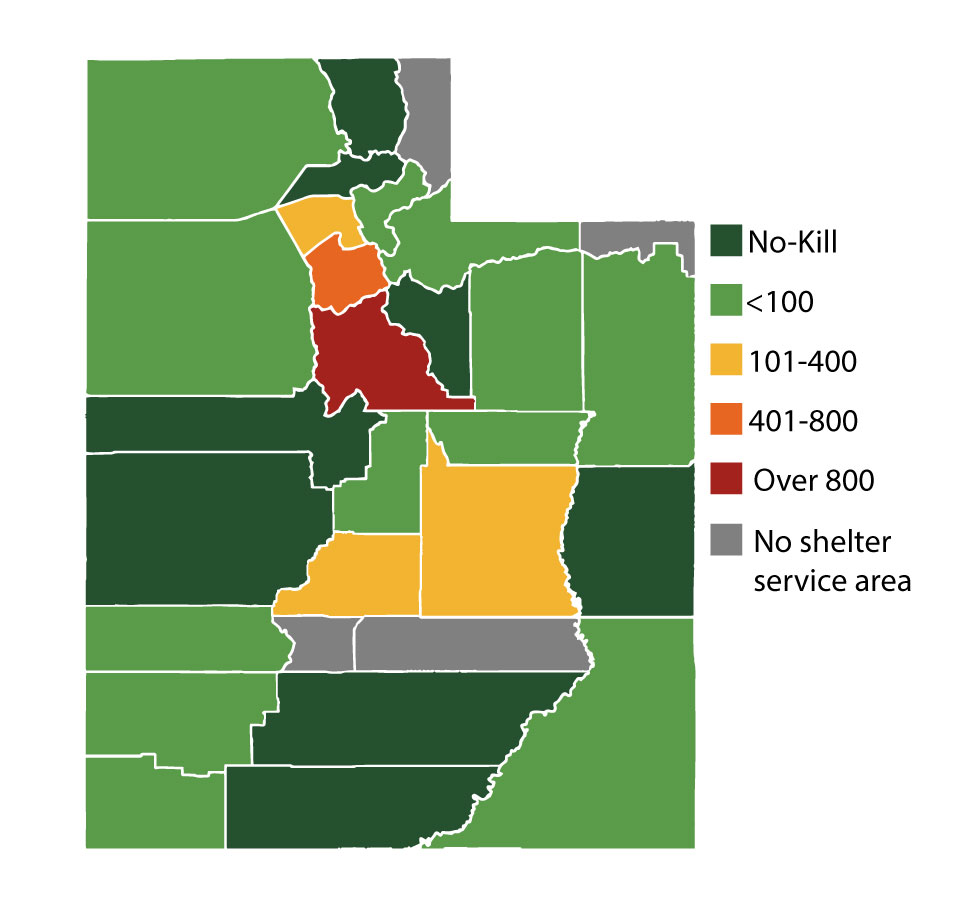